Last weekend I went on an adventure with my little brother to (drumroll please) Lego Land! A place of wonder and awe regarding all things Lego. As I went from exhibit to exhibit I was reminded of how therapeutic Legos are. You can build anything you want with Legos (My brother even told me someone has made a life-size, fully-functioning car out of Legos). The Lego Land we visited had an entire room dedicated to a model of the Dallas/Fort Worth area. 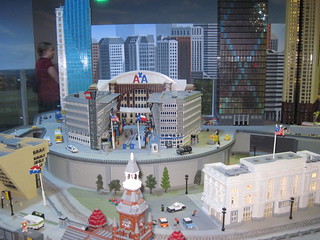 The AA building and surrounding area made entirely of Lego

Child Life Specialists always have a supply of Legos for the creative mind. Legos are a great way to keep a bored 9-year old in the ER busy, help a frightened 6-year old understand that there is more to hospitals than needles, or encourage a curious 8-year old to replay a medical experience.

You can take Lego in so many different directions that it’s a bit too much for one blog post. Today we’ll just keep it to the benefits of free play. To begin, I give you, my car: 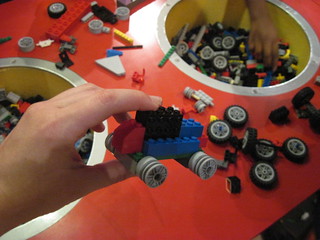 It’s not much, but it rolls!

Alright, I admit it, I didn’t put a ton of thought into it, mainly because I was watching my brother and thinking about how awesome it would be to write a blog post on this. My brother on the other hand was completely involved in building the best car to win the race. 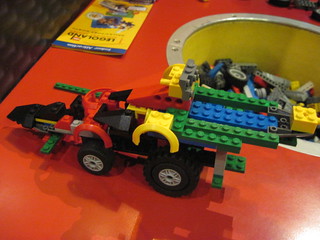 You can’t tell by the photo, but this car was twice the size of all the other cars and it did win all the races it was in. My brother told everyone that it won because it was heavier and more aerodynamic. But he wasn’t just using his knowledge of physics. He was exercising his mind, delving into his creativity. He was creating a car that expressed himself and his dreams (he wants to become an architect).

That in and of itself is a great reason to give kids Lego, but we can always take it a step further. When kids make and race cars together they can learn how to share, work together, and help one another. At Lego Land all the Lego bricks were in big buckets and everyone had to share the pieces. Also some people were unfamiliar with creating Lego cars (myself included) and there weren’t any instructions. So my brother and some of the other kids helped those of us who needed assistance in creating the car base. The race track itself only had a certain amount of spots for cars to race, so everyone had to take turns racing one another. Just like that, kids were working on 3 major life skills while playing with Lego!

My brother and I didn’t just build cars, we also built towers. At Lego Land they have an area where you can build towers with Duplo Lego Bricks on a platform and then make the platform shake like an earthquake. The goal was to build a sturdy tower that didn’t fall during the earthquake, or at least that’s what I thought. Apparently my brother’s goal was to build the tallest tower he could. We’ll let the photos speak for themselves: 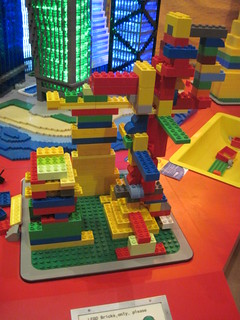 Towers before the earthquake 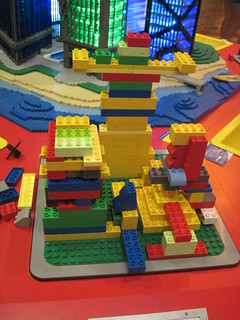 Towers after the earthquake

Anyways, what I thought was really great was how the little kids learned cause and effect with the earthquake machine. Kids could also challenge themselves to create a tower that didn’t fall down by using trial and error. By using the Lego Bricks kids are able to experiment in a safe environment.

Now, since this is a blog that’s devoted to talking about not just the pros but also the cons, I feel that I must also submit a word of warning to any aspiring or new Child Life Specialists. Lego Bricks can easily get out of hand. 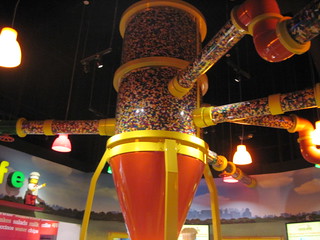 Look at all those Lego!!!

Those of use who have been in the field long enough know that Lego Bricks can sometimes be a pain, because number one, they are difficult to clean and number two, the pieces are so easy to lose. So far from what I’ve seen there are 2 ways you can clean Lego Bricks. You can sanitize each brick with a wipe which is time consuming. Or you can place all the bricks in a mesh bag and run it through the dishwasher, but then you have to wait for the bricks to drip dry which also takes time (plus the amount of time it takes for the dishwasher to run). Either way it takes a bit more time and energy to clean Lego Bricks than it does to clean other toys.

Problem number two is keeping the bricks from getting lost. This is mainly a problem when you have one of those super awesome sets that is meant to build a particular item. For example, a Star Wars Lego Set that creates a Star Fighter.

When you give a kid one of these sets and he or she is generally very excited to follow the directions and build it. When the child then can not finish the set because there is a missing piece, he or she can be disappointed and frustrated. Therefore while I think it is so much fun to build the awesome sets like Lego Star Wars and Lego Harry Potter, in a hospital setting I would recommend each Lego kit has an assortment of generic Lego Bricks for kids to build however they wish. Not only are you saving yourself a headache but you are encouraging kids to get creative.

Well, I think that’s enough for one blog post. So it you’ll excuse me, I’m going to try and figure out how to make my car stop running into walls! 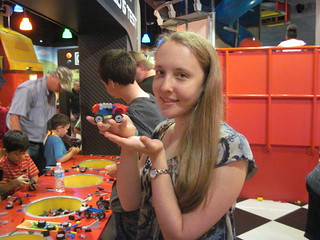 Here’s to a little playfulness with Lego!

Ages: 2 and up (For the young kids, make sure you give them the Lego Duplo Bricks!)

Materials: Lego Bricks of any kind