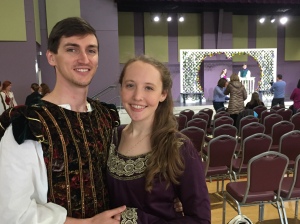 Me and my costar who played The Bard himself! You can see Romeo and Juliet in the background

I wanted to share a really cool project I recently participated in. It was a unique Shakespeare performance written for Morgan’s Wonderland, an inclusive amusement park. If you haven’t heard of Morgan’s Wonderland, it is amazing. I won’t go into detail because it deserves its own post, so stay tuned.

Back to today’s topic. The creative team at Morgan’s Wonderland has started a tradition of performing abridged versions of Shakespeare’s plays for the park and they cast people with a variety of abilities. This includes people who have been diagnosed with autism, Down syndrome, or other “disabilities”. But that does not stop them from giving some of the most heartfelt performances I have seen. I was given the opportunity to perform in their fall production titled “Scenes, Sonnets, and Soliloquies, Volume I”. I was one of the “normies” in the show and for starters I was impressed with their memorization skills. I realized very quickly that I had to work hard to keep up with them. 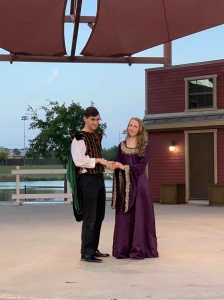 Myself playing Anne Hathaway reacting to one of Shakespeare’s puns.

Watching these young aspiring actors pull together a show really emphasized how much the theatre teaches people. Some of the performers had to work very hard to annunciate clearly and it translated to how they spoke off stage too. Other actors had to work on emotional expression and what they learned continued to assist them in their day to day life. After working with them I very much believe in the power of the performing arts.

If you would like to read more about the performance, check out this wonderful news article written by Deborah Martin.
https://www.expressnews.com/entertainment/music-stage/article/Morgan-s-Wonderland-aims-to-make-Shakespeare-13358829.php?utm_campaign=email-premium&utm_source=CMS%20Sharing%20Button&utm_medium=social