Be honest, how many of you (no matter how old you were at the time) wished that you had gotten a letter from Hogwarts? I’m definitely one of those people. Well, last Friday we were able to grant a few of those wishes by sending out this: 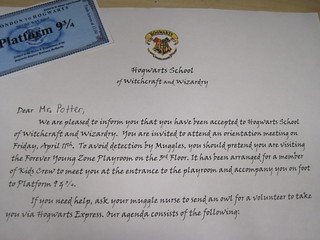 Yep, everyone got an acceptance letter to Hogwarts and a train ticket for the Hogwarts Express! But that was just the start of the fun. In fact, the theme day went so well that I’ve decided to share some of my experiences with you all. So this week’s therapeutic activity post will be a little different and I hope you’ll find some new ideas to use the power of Harry Potter in your own practice and/or life.

First off, I want to note that the preparation for this theme day did not happen overnight, and it definitely had many different hands that helped make it happen. I was very fortunate to have over a hundred volunteers help put this together as well as an amazing coworker who came up with the decorating ideas. We also utilized Pinterest to the utmost degree and I’ll be giving links to the sites where we got our inspirations for we definitely appreciated all the help. It took a week of preparation to decorate the playroom with a Harry Potter theme.

Of course we handed out wands, because a wizard should never be without his or her wand! We even were able to turn it into a therapeutic activity by encouraging the kids to enter into pretend play. A volunteer dressed up like a wizard helped the wands “pick” the kids and then the kids were able to decorate the wand with paints and glitter. After that they made their own spell books by choosing spells from the stories or writing their own. This encouraged them to again imagine what it would be like if they could make a change in their life and feel in control.

We also created a hospital version of Quidditch for the kids to play outside. Since we ran out of time, the game ended up being kind of like a Easter Egg hunt, but instead of eggs we hid a Golden Snitch and if a kid found the snitch he or she won and got a prize. The kids really got into the game, wanting to play over and over again. Every time I hid them, I told the kids that the snitch had flew away from me and was hiding again! 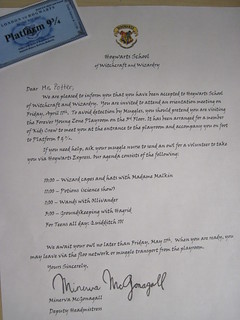 Letter with the schedule (signed by Professor McGonagall!!!)

We did a bunch of Harry Potter themed therapeutic activities throughout the day. Some of them were what you would expect: wizard hats, magic capes, and castles out of medical supplies. To give you an idea of the things we did, you can see the long version of the Hogwarts letter which also shows the schedule of events during the day. I got the idea from Helping Little Hands. I did come up with a few of my own ideas from thinking about the books and movies, as well as browsing Pinterest. One simple idea was making Floo Powder. 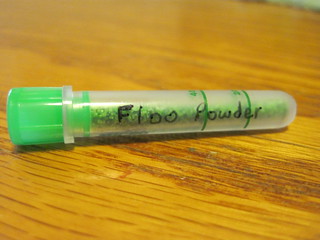 Simply state where you want to go and throw powder into the fire!

The kids took green colored sand and filled tiny vials to make the powder. They could then decide when to use the powder to “go somewhere else”. Fairly simple and quick, but it definitely fed their imagination. 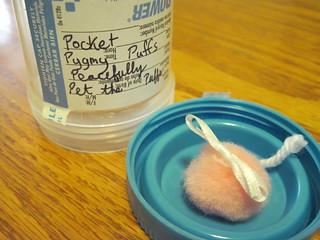 Also we made Hospital Pocket Pygmy Puffs, an idea I got from Pinterest. I glued a piece of string, a puff ball, and a little ribbon tied in a bow on top of each other, then glued the pygmy puff to the lid of the specimen cup. Here’s the picture of the puff inside it’s “home”: 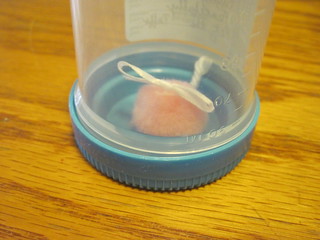 Along with the decorations, we had a bunch of places that for photo opportunities. My favorite was the wanted poster! 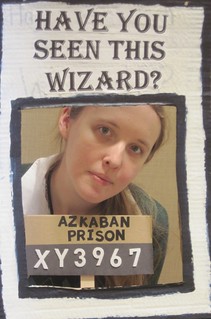 Apparently Azkaban is looking for me…

We had so much fun doing this theme day and so many people asked us if we could do it again next week! Although that might be a little too soon, we’ll definitely be doing the theme day again. I’ve already got lots more ideas to make an even bigger day! We’ll also be saving lots of the decorations so we don’t have to remake everything.

It was so cool to see how great an impact the day had on everyone. By using Harry Potter as a jumping off point, there were many chances for kids to get away from the hospital and enter into another world of fun and magic. It also sparked conversations about how we can use the stories in Harry Potter to inspire our own lives. I found that you can take this type of large scale activity any way you like, for the format is so flexible. You also don’t have to go all out, sometimes just the wand is all you need.

I hope you’ve enjoyed reading about my Harry Potter adventure and it’s inspired you to create your own magic. Have you ever created a theme day or party? What worked well and what didn’t? Leave a message in the comments below! I definitely had lots of fun working on the project this past week and I hope to do another one soon. I’m thinking maybe… superheros next?